CLEARLAKE OAKS— The Derby closed on Sunday afternoon to the applause of locals and out-of-towners who waited to go home until after the results were announced by Committee Chair, Dennis Locke.

After cancelling in 2020 and a scaled-back version in 2021, the 2022 derby was back to normal operations, and total entries were up 75 from last year.

“Welcome to the 38th annual catfish derby” Locke announced. “One thing we know for certain – while this is arguably the biggest catfishing derby west of the Mississippi – we know it is the largest fishing event of any kind, ever, on Clear Lake!”  We appreciate your continued support – all 957 of you who entered the derby this year – and your families.”

Derby participants came from as far East as Muskogee, Oklahoma; as far north as Enumclaw, Washington; and from all parts of California – 61% traveled to Clear Lake; 39% were from Lake County.

The Pearsons, a family of eight from Clearlake, are regulars at the derby and stayed to the end. “We didn’t place this year but we’ll definitely be back next year,” said Dan Pearson. “Fishing and camping, that’s what we love doing as a family.” 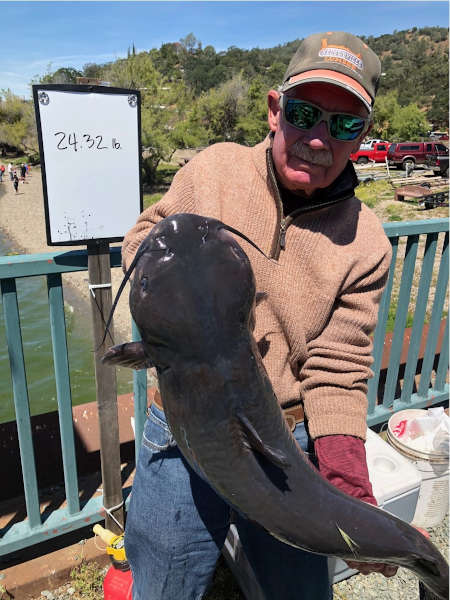 Formerly from San Diego, Sansome was the captain of a long-range fishing boat, the “American Angler.”  Dan has been entering the catfish derby since retiring to fish on Clear Lake. “I’ve wanted to live here all my life,” he said. “I fish for bass too, but this is the only tournament I enter. I love the challenge of catfishing and the high volume of fish in the lake,” Dan said. “As much fishing as I do, winning first prize this year is mighty special.”

With Sansome was his longtime friend, Ed Puente, who placed third in 2019 with a 26.73-pound catfish. Sansome was all smiles at his friend’s good fortune this year. “I met Dan years ago when I took a multi-day fishing trip on his party boat out of San Diego. I hadn’t seen or heard from him for many years when, about 8 years ago, I saw his picture in one of the local tackle shops. I looked him up and we’ve been fishing together on Clear Lake ever since. He’s an expert fisherman.”

If some names of the young derby winners sound familiar there’s good reason. “Many of the young people that participated this year have been fishing since they were strong enough to hold a fishing rod,” said Barbara Higman, a derby volunteer whose family has fished Clear Lake – and the derby – for years. “I’m so proud of my grandson, Tommy, for his first place win,” she said. “He’s a third generation fisherman!”

“I love to fish,” said Lee Her. “I learned to fish when I was young from my uncle and now, I’m teaching my nephew. Of course, winning is part of the allure but it’s so much more than that.  It’s coming together as a family, re-connecting with some of the derby people who I see year after year, and building on great memories, that’s what it’s all about.”

As for Darrel, “I’m hooked, I’ll definitely be back next year with my uncle,” he said.

For all scores visit: clearlakeoaks.org/derbystandings and for interesting comments and photos about the derby go to Catfish Derby At The Oaks on Facebook.